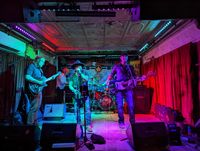 Johnny & The Mongrels are honored to open for one of the true icons of Funk Music; New Orleans Music! George Porter Jr. is an award-winning bassist, songwriter and vocalist. He is a founding member of New Orleans’ seminal funk band, The Meters and widely recognized as one of the greatest bass players of all time. Formed alongside Art “Poppa Funk” Neville, Leo Nocentelli and Joseph Zigaboo Modeliste, the pioneering R&B funk outfit hit the scene on the streets of the Crescent City in the 1960s, to ultimately become one of the progenitors of the funk music genre. The groundbreaking collective carved out syncopated polyrhythms and grooves inherited from New Orleans’ deep African musical roots. Porter’s heavy pocket and fat notes formed the rubbery bass lines behind funk classics like their signature “Cissy Strut,” the now classic 1969 funk instrumental released as a single from their eponymous debut album, which reached No. 4 on the R&B chart and No. 23 on the Billboard Hot 100 respectively. While the group rarely enjoyed massive mainstream success, they are widely heralded alongside James Brown, Sly Stone, and George Clinton’s Parliament/Funkadelic as the founding fathers of funk.

General Admission: $22.00 (Does not include convenience or handling fees)