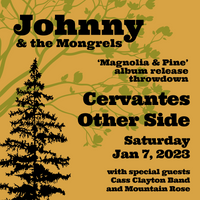 Join The Swamp Funk & Bayou Soul band Johnny & The Mongrels as they showcase tracks from their highly anticipated sophomore release entitled "Magnolia & Pine." This album from Johnny & The Mongrels revisits original material that the band has been performing live since 2015 but never officially recorded till now. Additionally, two singles were added to the mix, ("Love's Got Something To Do With It" & "Big Screen"), to round out another memorable session at world famous Dockside Studio in Maurice, Louisiana; home to 12 Grammy award winning projects to date. With very special guests The Cass Clayton Band & Mountain Rose bringing their signature grooves to the friendly confines of Cervantes Other Side in Denver, CO. Doors at 7pm; Show at 8pm. General Admission Advanced tickets - $15.00 Tickets at: http://bit.ly/010723Cervs